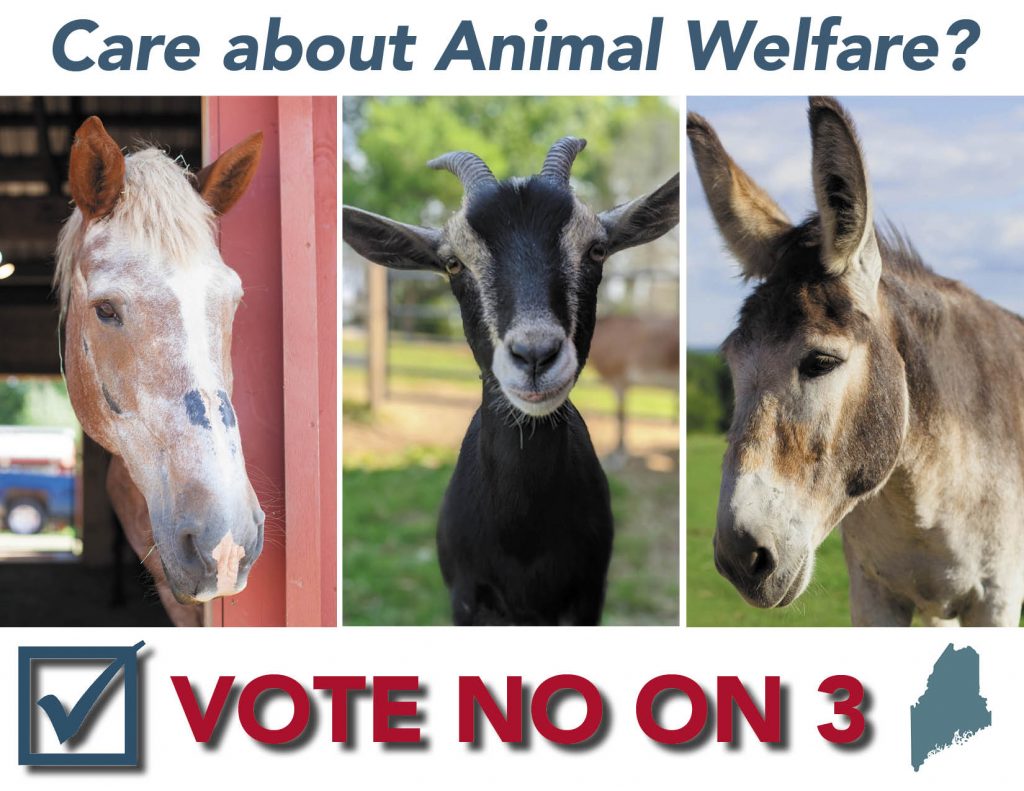 It isn’t an exaggeration to say that Question 3 is one of the most important pieces of legislation Mainers have ever been asked to vote on regarding animal welfare. Peace Ridge Sanctuary stands amongst the many organizations that are strongly opposed to this problematic referendum. We urge you to join us in voting NO on Question 3 on November 2, 2021.

The wording of Question 3 is very vague, proposing a constitutional amendment granting a “right to food” to Mainers, while setting a stage for our courts to figure out what exactly that would mean. By design, it could put any state law we currently have on the books protecting animal welfare, environmental protection, and food safety on the chopping block, potentially undoing all of the hard-fought progress animal advocates have made here in Maine over the years. Because of the problematic wording, many people aren’t even sure what they are being asked to vote on, so we wanted to break it down for everyone.

"Do you favor amending the Constitution of Maine to declare that all individuals have a natural, inherent and unalienable right to grow, raise, harvest, produce and consume the food of their own choosing for their own nourishment, sustenance, bodily health and well-being?”

If a majority of voters are in favor, the following amendment would be added to the Constitution of Maine:

"All individuals have a natural, inherent and unalienable right to food, including the right to save and exchange seeds and the right to grow, raise, harvest, produce and consume the food of their own choosing for their own nourishment, sustenance, bodily health and well-being, as long as an individual does not commit trespassing, theft, poaching or other abuses of private property rights, public lands or natural resources in the harvesting, production or acquisition of food."

At a first glance, a constitutional “right to food” sounds like a good thing. Food insecurity and hunger are real problems in our communities that need to be addressed. We believe that everyone deserves access to food. But our problems with hunger in Maine have nothing to do with people not having a constitutional right to food – the root causes have to do with poverty, inequality, and policies that focus on short-term relief instead of real, systemic change. Telling people they now have a right to food doesn’t feed them.

In addition to not actually addressing hunger relief, the proposed amendment will have far-reaching consequences, many of which we can’t yet fully understand. Constitutional amendments are a big deal – even more so when worded in a way to be in conflict with many existing state laws. If Question 3 passes, any state laws we have protecting animal welfare, our environment, or public health surrounding food safety can be challenged in court if they infringe on people’s constitutional right to raise, slaughter, and eat any animal of their choosing.

When the proposed language was called out for being too vague and likely causing more harm than good, text was added to ensure that trespassing and other property rights could not be infringed upon by people exercising their “right” to produce and procure food of their choosing, but nothing was added to require that local laws regarding animal welfare, environmental protection, or public health must be adhered to. Even when this flaw was pointed out, it wasn’t corrected. This was intentional. It is by design.

Those who helped lobby to get this referendum on the ballot want to be able to raise and slaughter whatever animals they want, however they want, wherever they want, without having to follow any of the laws that have been put in place to protect animal welfare, environmental protection, zoning, or public health and safety.

Farmed animals in particular have very few laws in place protecting them to begin with. They are the most abused and least protected animals on the planet. This constitutional amendment could strip away the important victories animal and environmental advocates have won over the years here in Maine as cases will undoubtedly be brought to the court to overturn laws that are suddenly in conflict with this new amendment. This amendment would also ensure that we can’t likely pass any additional state laws protecting “food” animals (ie: any animals Mainers choose to eat) because they would infringe on Mainer’s constitutional right to raise and slaughter animals. Instead of helping us progress towards more just food systems, this legislation pushes us back.

A vote yes on Question 3 paves the way for gutting animal protection laws and allowing a constitutional justification for immense animal suffering. If you care about animal welfare, please join us in voting NO on 3 this November.

Help us spread the word! Unless they have fully researched the proposed amendment, many people aren't aware of how damaging Question 3 would be for animal welfare. Many people just see the phrase 'right to food' and assume it must be a good thing. The animals need your help to spread the word! You can help by sharing this post and others explaining the issues with Question 3. Help us reach more people by saving a copy of this image to print (or blow it up on a tablet screen) and take a photo of it with one of your animal friends or yourself and share on social media with the tag #NoOn3Maine to help raise awareness with your friends and family about why you oppose Question 3. 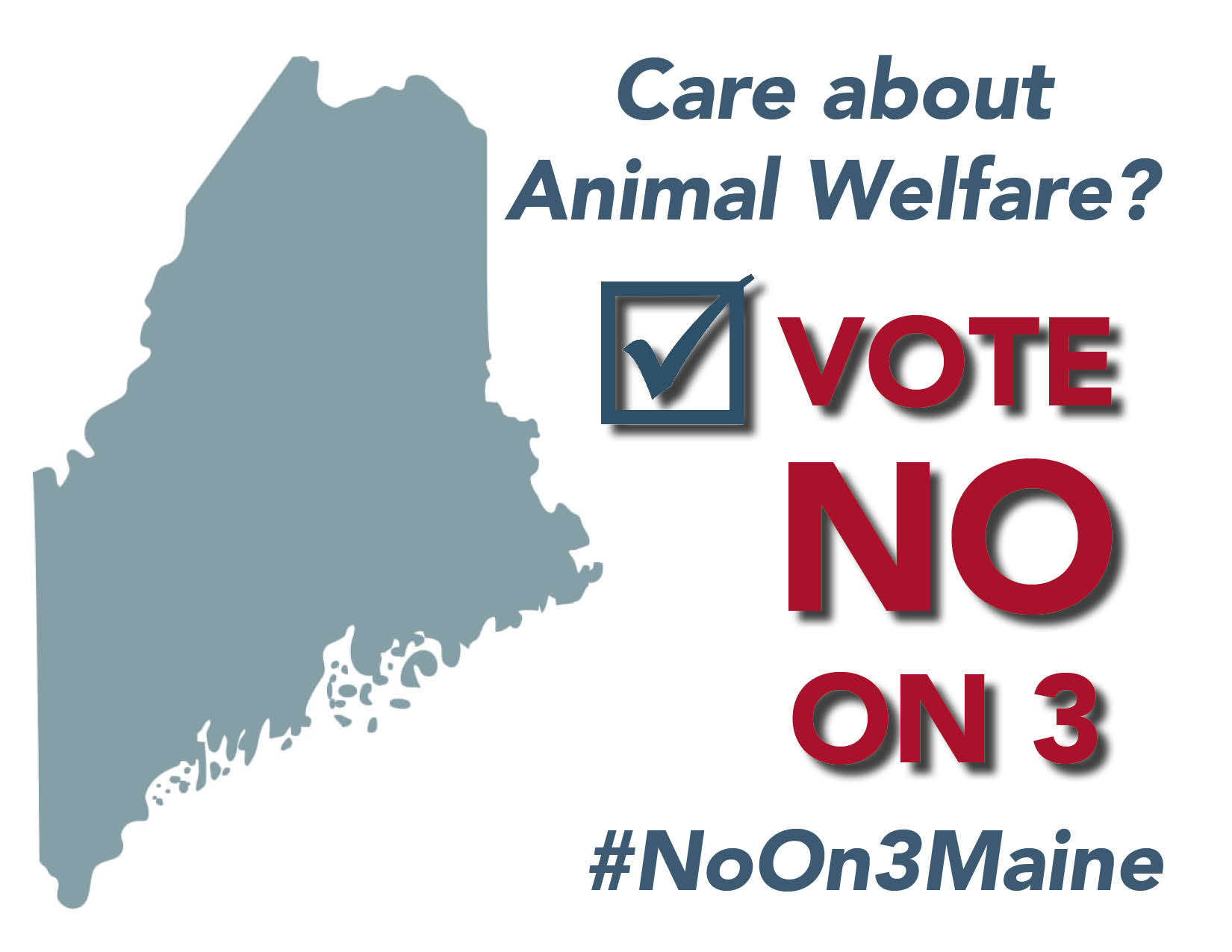